If you’re someone who laments the downward spiral of society, surprise! We have always been assholes. My husband got me a subscription to newspapers.com for Christmas, and I’m fascinated by the wretchedness.

Oddly enough, there are people better than I who don’t gawk at wreckage. We pulled up to one house that had been converted into a gambling parlor. Despite being surrounded by nowhere, they put a terrifying and punchable looking mannequin out front to attract attention. An employee came out and asked if we were coming in. I told him that I was just looking because there had been a famous murder there. He shrugged and went back inside. I imagine his co-worker asking what happened, him repeating me, and her being outraged that he didn’t ask about the murder. Weeks later, she’s still going through true-crime podcasts trying to find out what happened.

(The murder was a sad one. During WWI, a guy picked up a teenage war bride, and instead of giving her a better life, he eventually beat her to death in a quiet house at the end of a suburban block.) 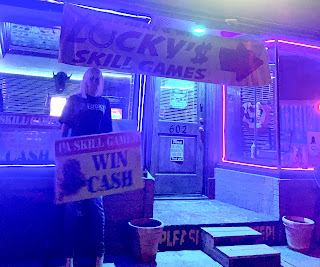 Mr. Emplolyee-of-the-Month gave about as many shits as his terrifying mannequin.

Some murders, while still tragic, are gruesomely amusing- like the one near us where Mr. Lorenzo Savage was convicted of murdering Ms. Ethel Barthel.

In 1923, this house in the Shadyside neighborhood of Pittsburgh was home to Mr. Lorenzo Savage and his family: 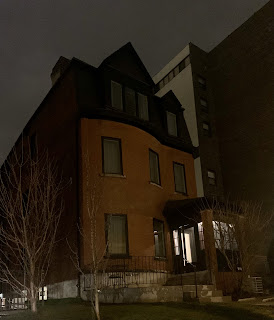 He was the former butler to Dr. Marshall and had been laid off three months prior. Dr. Marshall’s nurse and secretary was a 28 year old woman named Ethel “Elsie” Barthel. Mr. Savage, who dressed as dapper as can be, fancied himself a “Jamaican Voodoo Priest” and sold “charms” and “spells”. By unintentional admission from his own title, he was a charlatan. Even though his awesome name was real, he wasn't Jamaican. He wasn’t even from a country where Vodun was regularly practiced. He was from New Jersey. His parents were from Virginia, and their parents had also been born in Virginia.

Nurse Barthel was a hard-working, nice Christian girl and engaged to be married. She was also pregnant with a baby that wasn’t her finance’s, and the medical attempt to “restore her period” failed her. The claim was that she made an appointment with Mr. Savage in the hopes that he could use his magical powers to make the pregnancy disappear.  The hefty price tag was $400 which is about $6,000 in 2022. Weeks later in court, Mrs. Barthel, mother of Elsie, testified that it was a desperate attempt to stop the pregnancy before she began showing. However, Mr. Savage testified that Nurse Barthel was in love with a man who didn’t return her affection, and she wanted a spell for the man to love her back. He admitted to giving her a hand of cards that was a “charm”.

Nurse Barthel’s body was found at the abandoned, and unfortunately named, Hussy Mansion. It had been the residence of one of Pittsburgh’s many steel tycoons but now used as a place for “petting parties”. She had been punched, then in a mighty escalation, bashed with a 75 pound block of granite. There was a hand of playing cards next her which became referred to as “the death hand”. (I doubt they contacted an occult specialist for this insight.)

At first, Mr. Savage tried to use his wife as an alibi, and she wasn’t interested in providing one. Next he admitted to meeting with Nurse Barthel, was angry that she only brought $31 when she owed $400, but left instead of becoming homicidal. (The rest of the money was found in her bedroom.) Finally, he admitted that he did it, took them to the crime scene, and step by step showed them meticulously how he did it. Afterwards, he said he didn’t do it, and the confession was coerced.

I’m no Encyclopedia Brown, in fact, I’m inclined to go with wizardry in cases that don’t even involve claims of magical powers. Yet, even I have noticed some oddities here:

1. A nurse wouldn’t keep seeking medical or herbal alternatives before turning to superstition?

2. Her mother, a wealthy woman of high society, admitted that her unmarried Christian daughter was not only pregnant, but seeking to break their legal and moral law to end it?

3. Nurse Barthel couldn’t just lie like the rest of us and say the baby is her to-be husband’s?

5. Why didn’t she bring the money if she had it? Homicide is an odd alternative to $6000 for a man laid off with a family to feed.

Without any proof, and probably never truly knowing, I’m going to guess that the baby was the result of Dr. Marshall’s employees meeting regularly at the Hussy mansion during the three years they worked together. In fact, if he had been laid off three months prior, and the pregnancy wasn’t showing yet, then that would align with the time Dr. Marshall might have noticed his assistant running off to vomit every few hours. Mr. Savage was handsome, and they were close in age. Another suspect had been a man dubbed “one of her sweethearts”, but he was cleared because his alibi held up. Maybe Mr. Savage was another “one of her sweethearts”, and perhaps he was the man who wouldn’t return her affection. Forbidden fruit is all the sweeter, and she had enough money saved up to run away together. Once the baby was born, it would be hard to deny the paternity. The evidence died with her. As far as the hand of cards, that’s just weird. Maybe he dabbled in the dark arts after all or used it as a red herring. Why would he have left it at the crime scene?

Mr. Savage was found guilty and sent to die by electrocution. I almost felt sorry for him until he threatened to use his powers to kill everyone and their families if they followed through. They ignored his threats, and unlike Tutankhamen’s crypt, the curses never came to fruition.

The lead detective claimed it was simply a fraudster trying to get his money. Mr. Savage had given Nurse Barthel the cards, told her to sleep on them for three nights, then come back and see him with the money. When she didn’t bring the money, he got violent. In fear over the repercussions, he killed her. I guess this makes sense and would explain why his wife didn’t want to provide an alibi. If he had a propensity towards violence, his wife may have been relieved it wasn’t her or the kids in the morgue.

Here’s a final fact though: the fiancé of Nurse Barthel drove a taxi and there’s an hour unaccounted for in his time sheet. During that time, he picked up a customer near the Hussy mansion. It was Mr. Lorenzo Savage.

My second and less exciting theory is that this was a coincidence. A taxi driver isn’t going to have elite connections to frame an innocent man. This reality is probably much more simple. A man with a quick temper acted out of anger and fear. Prisons are filled people having poor impulse control. The Hussy mansion was between their houses, and they needed a private spot for the sensitive matter.

I have to give Mr. Savage credit here: he technically delivered what his “charm” promised. In fact, his spell worked so well, it boomeranged. Maybe be wasn’t a phony after all.