Showing posts from December 3, 2010
Show all 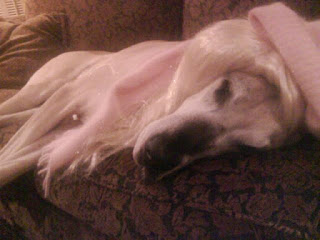 I found out why my blog was so popular in the UK.  Apparently it pops up when "sexy pregnant teenagers" is put into the Google search engine.  Do I really want such a perverted audience?  Let me answer with this: Here's a picture of the dog dressed up as me in high school: Someone can't hold his roofies.
Post a Comment
Read more

My Dog Used to Be Sexier 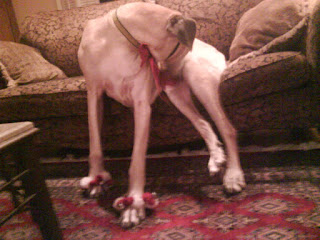 People would ask about Pivo and I would tell them, "He's sexy."  They thought that was weird until they would meet him and say, "Indeed!  That's one sexy dog."  He was muscular with long limbs and would stand with his head high, regal looking.  Sometimes when it was windy, his jowls would flap in the wind.   Old Man Piver He is nine now which is old for a Great Dane.  I don't want to deal with the uncomfortable emotions of losing him, so I've considered hiring a hit man.  He would sneak into the house while we're away, kill the dog, and dispose of his remains.  Perhaps he can leave the head in my sister's bed while she's sleeping to remind her what happens to snitches.  I'm thinking that my Christmas card this year should be a picture of us smiling with the caption, "This is Pivo's last Christmas!"  Last year's card was a picture of my sister scowling as my mom used her as a mannequin for a Santa robe
Post a Comment
Read more
More posts