Now that football season is over, I can reflect on the life lessons from my stint as a gambler. Some consider it a sin and feel it’s best to abstain. They prefer gambling on their eternal salvation by judging others who bet on sports. For others, it’s the only time they pray. Then there are those unfortunates who become addicted and need help. It’s a poison to them that’s best left alone, and since I haven’t had a drink in 14 years, I get it. Genetic predisposition to addiction is like inheriting someone’s messy basement we don’t want but have to clean up anyway. That’s just part of being a grownup though. Maturity in its barebones is fixing things someone else broke.
Then there are those like me: middle-aged mothers in sweatpants who desperately need a vice. We promised ourselves thirty years ago that we would never turn out like this. Our moms were lame, but we were going to be cool. Then going out became too tiring. New fashions became unflattering. Salt and sugar became our bodies’ enemies.
Everyone needs something naughty. People too wholesome leave others feeling dirty. Vices connect people the way a private joke does. They build camaraderie among us exhausted from being good all day. We need a break from the constant self-restraint of role modeling.
When I got sober at 26, I still smoked for a few years. Eventually, I had to quit because it was no longer cool. It’s badass to smoke in one’s twenties. After that, it’s just a filthy habit. In my thirties, I stayed wild by eating ice cream for breakfast and driving a sports car. Now I drive a Highlander and can’t remember the last time I ate a carbohydrate. I used to enjoy murder mysteries, but my wiener four-year-old cries if someone gets hurt and won’t believe that so many people fall asleep eating ketchup. As a Portland girl, I drank coffee by the pot. Now more than one cup gives me anxiety.
With all of that gone, gambling this past winter was refreshing. It showed me that I’m a far better person when I have an outlet for suppressed depravity. My husband laughed when I said this and reminded me that I’m the only person he has ever known who cried from losing $2.50. (I cried because I would have turned that into a small windfall if Tom Brady hadn’t walked backward and lost me a few yards.)
He’s also a far better person than I am. Less uptight, funnier, perceptive, etc. It’s because he thoroughly enjoys his vices. He got a free $100 bet before the last football season started and bet it on the Rams winning the Super Bowl. We went to Ocean City. 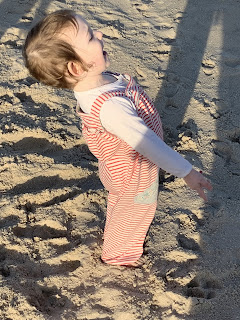 “Thank you Aaron Donald!”
Email Post
Katt Funny
Freelance humorist. I also document historic sites around me. During the Halloween season, I research and travel to supernatural places. My family loves history, and we go everywhere with our small children. I also host a long-running hashtag comedy game on Twitter.