Football season is finally ending, and with that, so is my stint as a gambler. I studied hard, developed new skills, made a friend along the way (my husband), and my children learned valuable life lessons, like not to stand in front of the TV. I’m looking forward to next season, but until then, I’m going to be busy with my new subscription to Newspapers.com.

At the start, my husband picked my bets, but after some of them lost, I developed eye strain from glaring at him. Then I studied “expert picks” and hope for the sake of their families that they don’t take their own advice. Eventually, I was diligently researching everything necessary to make my own educated guesses. Night after night, I studied players like a psycho ex-girlfriend, looking for any changes that could affect their playing.

Now as it concludes, I’m officially a fan who developed her own subjective relationship with it:

1. I have a fondness in my heart for the Steelers, and even though I’m not their biggest fan, I’ll always root for them. In fact, cheering for them has helped me feel a sense of home in Pittsburgh. These past 5 years, I’ve felt like an orphaned Portland girl just visiting.

3. I’m not a fan of the Chiefs, but I’m a huge fan of their players. They’re young, insanely talented, and have big personalities.

4. There is no one else like Tom Brady. Future generations will consider him the greatest player of all time.

5. Aaron Rodgers is sexy, and I’m ashamed of myself for it. It’s like I turn my head in repulsion, then peek out of the corner of my eye.

6. Matthew Stafford is my favorite player on and off the field. His whole family seems awesome. Because of him, I’m now a Rams fan and was overjoyed when they made the Super Bowl.

Now on to the recipe portion.

Here are my very last Sportsbook picks for this year: 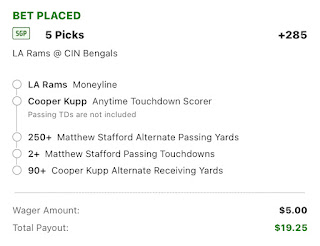 (One of these will be wrong.)

1. Stafford gets 250+ passing yards, maybe many more. My husband talked me down from betting 300+ yards. Also, add 2 passing touchdowns. Since he’s my favorite player, my heart might be fogging my judgment, but then again, he’s my favorite player because he comes through under pressure. As a rookie, he threw a game winning touchdown with a separated shoulder. Not to mention his wife surviving brain cancer, and they have four girls which includes a set of twins. He’s psychologically tough enough to play his best.

2. The Bengals might actually win, so hedge your bets here. Quarterback Joe Burrow is like me when I was in college- cool as shit, smokes cigars, and hoards all the good luck. There’s no logical reason why they beat the Chiefs twice to get to the Super Bowl, and if there’s no logic, there’s room for chaos. 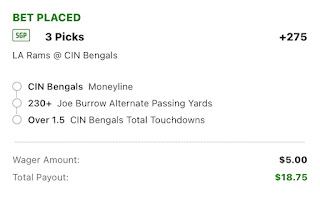 (Bet hedged. Yet still, one of these will be wrong.)

3. HOWEVER…moneyline on the Rams. Without superstitious intervention, like a voodoo curse, they’re the better team. Also, my husband bet they would win the Super Bowl before the season even started. He has two extraordinary gifts: he knows when an Arby’s is nearby, and he’s great at gambling. Since we’ve never eaten at Arby’s together, his powers are all the stronger for sports-betting.

4. Cooper Kupp will probably get at least 90 receiving yards and score a touchdown. He and Stafford have chemistry that’s elusive to even the happiest marriages.

5. Stafford will get MVP (and go on to become a hall of famer.) Without being hindered by the Lions’ curse of Bobby Layne, he’s thriving. Sometimes good things happen to good people.

The only prediction I can make with 100% certainly is that one pick in each bet slip will be wrong. It happens each week, and I’m hoping since it’s the Super Bowl, the curse of “getting one leg wrong in each parlay” can be temporarily lifted. But, since the Lions couldn’t win a playoff game with Stafford despite their aforementioned curse expiring the year before his first season, I won’t press my luck.

(There’s no reason for me to suspect this might happen. It just appeases my ego to lose a bet I already know is dumb.)
Email Post
Katt Funny
Freelance humorist. I also document historic sites around me. During the Halloween season, I research and travel to supernatural places. My family loves history, and we go everywhere with our small children. I also host a long-running hashtag comedy game on Twitter.