My Get Poor Quick Scheme

Until the Super Bowl is over, I’m on a football jaunt. Just like writing about parenting, it can be exclusive and boring, so I appreciate you making it this far. Since I’m at such a rudimentary level in my sports’ education, it won’t be too hard to follow along. If this sounds like I’m over-explaining things, please don’t feel insulted. It’s just where I’m at.

Right now, I’m working on my betting picks for this weekend’s playoff games. I like to pick parlays, which means I predict a few things will happen. If one of those things goes awry, the whole thing is a bust. The greatest benefit of winning these isn’t the money; it’s that when I’m right, my children think I’m psychic. They grow out of believing Santa is watching them, then enter a teenage nihilistic phase where they no longer think God is watching, but if they fear their mother has a secret crystal ball, they may think twice about lighting up that doobie in Madison’s basement.

This weekend, Pittsburgh’s beloved Steelers are playing. They barely made it to the playoffs and will be playing the Kansas City Chiefs who are one of the best teams right now. The quarterback for the Steelers is Ben Roethlisberger who is retiring this year at the old fart age of 39. (I spent most of my spry 39th year enjoying a geriatric pregnancy.) He has been their quarterback for eighteen years and is considered one of the greatest of all time. If they lose this next game, it will be his last, and the city is already grieving his departure. 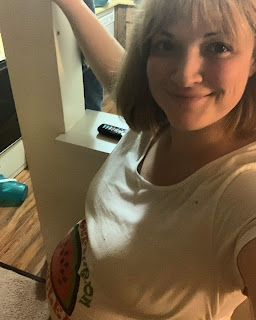 With this in mind, my betting picks are as follows:

1.) The Steelers will win by one point. A city that puts fries on their pizzas are tempting fate for heart attack opportunities.

2.) The Steelers will get 3+ sacks. Their current outside linebacker (TJ Watt) is tied for the record of sacking the quarterback the most times in a season. This is a rough spot to be in. People need their own rung on a ladder, so it’s better to be second than tied for first. My guess is that he’s been sacking people all week to reassure to himself that he’s superior.

3.) Ben Roethlisberger will get under the predicted amount of passing yards. Reason being: the closer we get to our last day of work, the more our body starts molding into television watching formation. We start preparing for catching up on all the shows we missed. Even if he is focused on the game, his body knows it’s about to watch the last season of Dexter because he heard good things about New Blood. He’ll be distracted by intrusive thoughts like, “Did John Leguizamo guest star on a season?” No, that was Christian Camargo somehow mixed with John Lithgow. 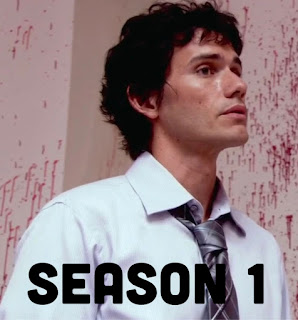 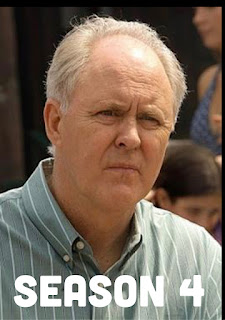 4.) Najee Harris won’t get a touchdown  because the universe is out to get me. He gets touchdowns all the time, except when I’m counting on it. Most likely, while he’s asleep, a voice creeps into his subconscious saying, “There’s a woman in Pittsburgh who could win five whole dollars if you score a touchdown. Be prepared for flying tackles. Huh? Erm..I suppose she’s kinda hot if you’re into the middle-aged mom thing.

5.) Chase Claypool is going to have fabulous hair. This isn’t currently being offered as a bet because Sportsbook sites don’t take my suggestions seriously. 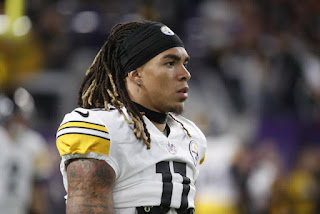 (Be still my heart, Goldilocks.)

6.) The total score will be over five points and under a hundred points. I know, I’m a wizard.

8.) Patrick Mahomes, the baby-faced quarterback for the Chiefs is going to have 250+ passing yards. This sounds like it contradicts my prior statement about Roethlisberger not getting as many passing yards himself, but they’re going to run the ball more because the Chiefs have a weak defense. The Chief’s success is entirely dependent on Mahomes passing for touchdowns. The only chance the Steelers have is a strong defense and keeping it out of Mahomes’ hands. I occasionally know what I’m talking about. (Btw- a “safety” is when the offensive player with the ball is tackled in their own end zone, and the other team gets two points. There are more scenarios, but this one is the most common. You may have seen these in compilations of football bloopers with “Yackety Sax” playing.) 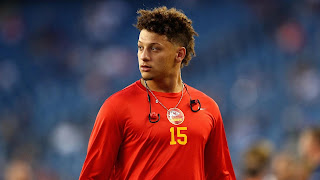 9.) It’s predicted to snow in Kansas City that day. That gives the Steelers an advantage because Pittsburghers treat the snow like Portlanders treat the rain- they put on a hoodie and give zero shits. When it snows here, not one aspect of life changes. In Portland, the city shuts down and people sled down hills. If they tried that here, they’d fly head first into traffic. Even if you’re certain the Chiefs will win, don’t count on them covering the spread. My husband says it’s the opposite- Pittsburghers can’t drive in the snow and, like Portland, the city shuts down. No, Pittsburghers can’t drive in general. They’re the nicest people who release years of repressed rage while driving. They only shut down for blizzards because they’re not a city of Waffle Houses.

10.) Everything I just said is wrong, so pick the opposite, then send me footage of yourself making it rain with all your winnings.

With all this said, I do have one sincere tip: may everything in our lives be for entertainment purposes.