Marriage Is A Gamble

Since I didn’t like football, my husband tricked me into enjoying it. He introduced me to sports-betting, and now I know excessive details about every NFL wide receiver, including how to pronounce Equanimeus St. Brown. 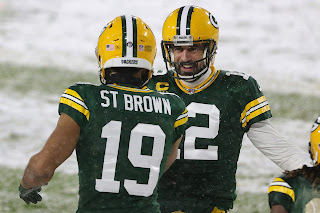 I can understand why people get addicted to gambling despite it being a system designed for “the house to win”. With skill and research, people can learn how to make good bets, but certainty is impossible. Try betting on a running back getting over seventy rushing yards, then watch him injured five minutes in.

When money is lost, there’s an urge to win it back immediately, especially if the loss is by one measly point. That feeling of being so close is pure frustration. Gambling sites regularly reward players by giving them back their money- in the form of free bets. It’s a downward spiral with a win here and there for the sake of intermittent reinforcement. Like being a kid with a drunk parent who occasionally takes them to the zoo.

One would think with my history of addiction, this would be a problem for me. In fact, the first time I lost $5, I flipped my lid, said I was a degenerate, then locked my account until January. After a few days, I wondered if I had overreacted. Jason informed me that I hadn’t lost money. I had deposited $5, won $10, then lost a $5 bet.

In response, I found some sanity and a better site. We use the same account and set limits on how much we are allowed to deposit per week. Mine is a cool $25. I bet $5 per NFL game I watch. That’s Monday and Thursday nights, and three games on Sunday. Thanks to the reliability of Tom Brady, I win about one out of every five bets. Most weeks, I break even, but sometimes I’ll make an extra $1.25 to $8. It sounds like a waste of time, but people do all kinds of weird things to spice up their marriages, and we have no use for a pool boy.

As far as triggering addiction, oh yes, it definitely has, but not to gambling. I’m getting my jimmies off the sweet rush of being right. There’s no greater euphoria in a marriage than being proven correct. Jason’s head is filled with sports knowledge and strategy. He’s excellent at poker and winning arguments against people who aren’t me. However, I am a wife. I run the house, and the house always wins. As the children sleep, I read stats, weather reports, injury lists, and game predictions. Then I make betting lists based on where teams will fall short. I’ll bet that they won’t get 20 points, and the quarterback will throw an interception. I’m my mother’s daughter, so my eyes are adapted to fault finding. If I tell my handsome expert husband that he’s expecting too many receiving yards on a windy day, then it’s dopamine city if I’m right. If you haven’t gotten to tell your spouse to suck fat donkey balls, then you haven’t truly lived.

Jason thinks it’s mean to bet for a team to score under a certain amount of points because then I’m cheering against them. I told him that if they prove me wrong, then I’m happy for them. Like when I bet against his beloved Lions and thought I was going to make a cool seventy cents because they never win. That day, they accidentally won, and Jason was so happy he cried. So, it’s like I paid five dollars for his ephemeral joy, and that’s a bargain.

Not only am I bonding with my husband, the children have stopped sobbing when we put a football game on. They enjoy cheering with us. Yesterday, Zach jumped up and down with me chanting, “Cover the spread! Cover the spread!” Their favorite cheers are raising their arms over their heads, yelling, “Touchdown!” and throwing pillows while shouting “F*cking ___, I’ll burn down your childhood home.”

I’m still learning how to lose graciously. Jason consoles me and says I made excellent bets, but we can’t predict things. He has explained that the best gamblers still lose most of the time, just their wins cover their losses, and that’s what I’m doing. Easy for him to say. He got a $200 free gambling credit ages ago and has been playing off of it ever since. I cashed out this week with $8 extra dollars and $24 in free bets. According to him, that’s really good. No, “really good” is being invited by the sportsbook  site to enjoy a Steelers game from their luxury suite at the stadium, with our own private bathroom and gourmet spread. Jason got to bring a guest, and I wasn’t even his first choice, reason being, “…but you don’t even like football.”