Because It’s Tradition, That’s Why

Conversation with my mom many years ago:

Now it’s my turn. Jason doesn’t understand my relationship with the holidays. I get excited and count the hours after Halloween until my family lets me decorate. Then on Thanksgiving Day, the official portal to the Holiday Season, I bitch nonstop about how no one helps, how expensive the food is, how I don’t have any counter space to prepare, how I hate everyone and the dumb looks on their faces, and how my husband is in an emotionally abusive relationship with the Detroit Lions.

Then, after I’ve passive-aggressively cleaned up after everyone by banging pots and pans loudly in the sink, I put my feet up and gush about what a wonderful time I’m having. My family can’t understand this when twelve hours prior, I was telling them to burn in hell for going number two after I cleaned the toilet. Now after a long day, I’m all smiles and asking who wants to help put up the Christmas tree.

Conversation with my husband a couple nights ago:

Jason: How can you like the holidays so much when you complain about them nonstop?

Me: It’s not just me; it’s every person who hosts holidays. They bitch incessantly then gush about how much fun it was.

Jason: That makes no sense.

Me: (Shrug) But it’s tradition… 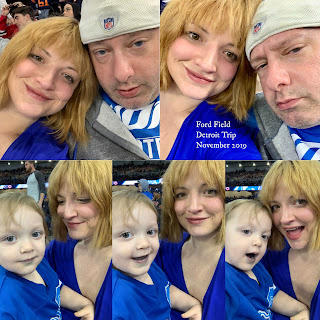 (Thanksgiving 2019, we went to Ford Field to watch the Lions crush Jason’s soul. Then I spent a buttload of money on mediocre room service for our holiday feast which included a Little Caesar’s pizza.)