- September 24, 2021
Near where my husband grew up, a new business appeared a few doors down from one of his favorite pizza shops. It claimed to be a massage parlor, but I told Jason, “That’s clearly a rub-n-tug.” He was skeptical, but upon inspection, did think it was odd that they were open until 11pm, and the only way to get in was by calling the number from the Post-It note on the front door.
I looked them up on a site that lists local massage parlors offering “extra” services, and sure enough, there it was. In fact, dozens of them were listed, and while reading the reviews, I suddenly realized that my mom accidentally sent me to one on my 25th birthday.
Upon reflection, they weren’t even trying to disguise it. This place was in Beaverton, Oregon and advertised as an “Asian spa”. I had never had a salt scrub added to a massage before, so I assumed side boobs and inner thighs were part of it. As far as her “thoroughness”, I reasoned that she should be lauded, not criticized, for going above and beyond. Besides, as a professional massage therapist, she is trained to be careful not to touch private parts no matter how uncomfortably close she gets to them. The talking with her hand on my butt was probably a cultural difference, like how in some countries, they greet by kissing on the cheek. Americans culture is so prudish.
Perhaps the most telling sign of all was thinking during the massage, “She looks like a prostitute”. I deduced
it was from the room being so stuffy, so of course she was wearing hot pants and a bralette. My birthday is in February.
My cluelessness lasted sixteen years. I wish I had figured it out sooner. My mom would have laughed so hard learning  she unknowingly bought me an hour with a prostitute as a birthday present. Surprise! 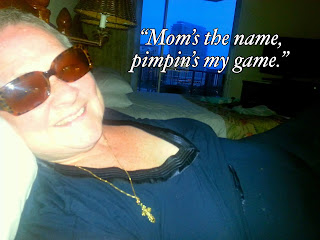