- September 28, 2015
I have slowly been organizing the photos and mementos that were stored at my mom's house.  Among the piles was this little guy: 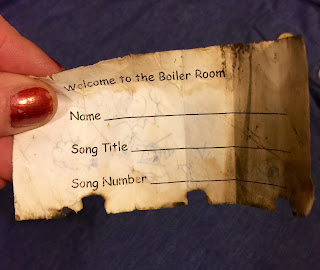 It's an old karaoke slip.  Andy and I loved doing karaoke.

Notice how it's all burnt up?  That's from smoking heroin.  It's called "chasing the dragon".  We were under the impression that it was less dangerous or addictive when smoked.  Growing up during the Nancy Reagan "Just say no!" era was the drug education equivalency of teaching abstinence only sex education to teenagers. 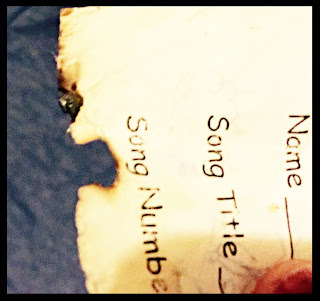 That's black tar heroin that got stuck on the slip.  Either that or the residue- I wasn't interested in getting close enough to find out.

There was a period of experimentation before addiction when things were still fun.  A lot of kids smoked heroin with us, then stopped and went on to become lawyers and social workers.  Most of them liked it way more than I did.  I don't know why Andy and I couldn't put it down like they could- addiction is just weird like that.  Sometimes I wonder if he was still alive, would he be sober now too?

This is on the back of the slip.  Andy drew it: 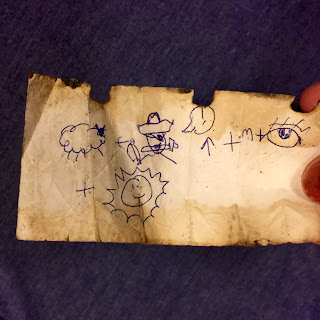 It says, "You are my sunshine."